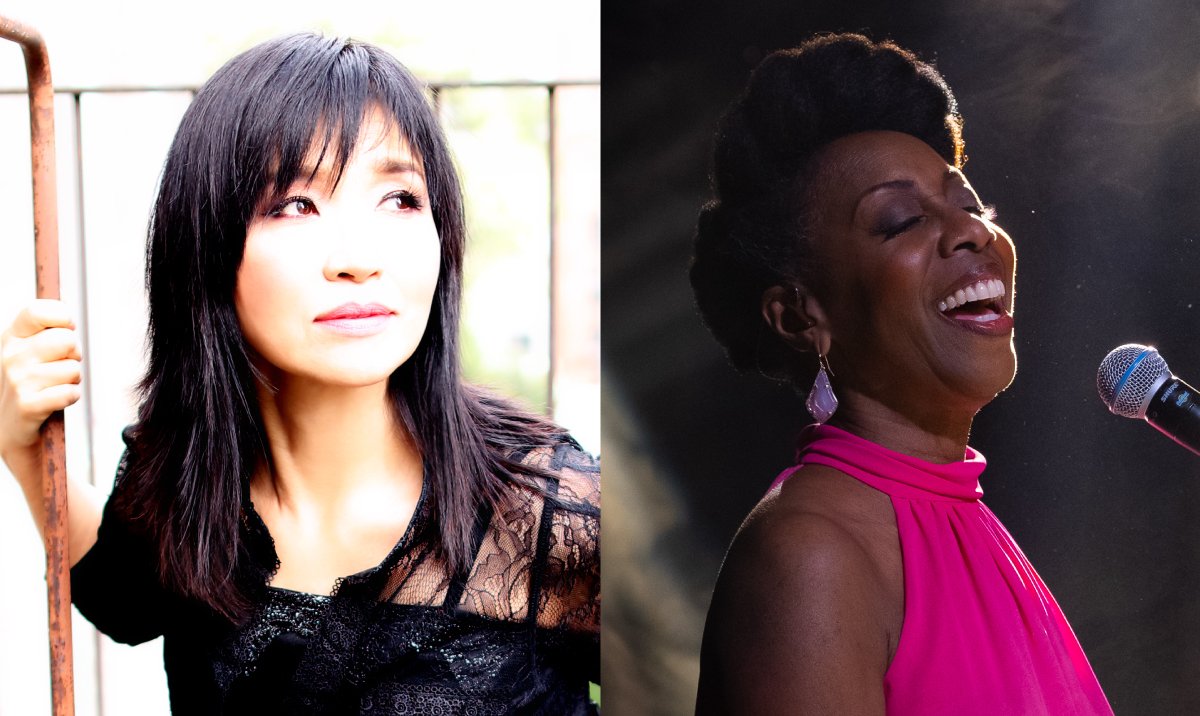 “There is a strong spiritual quality Keiko Matsui brings to all of her creative projects.”- The Los Angeles Times

Acclaimed pianist, composer and humanitarian Keiko Matsui’s transcendent and haunting melodies have long sought to build bridges. Her sonic cultural exchange has reached the hearts and minds of fans throughout the world and has allowed the pianist to work alongside icons Miles Davis, Stevie Wonder, Hugh Masekela and Bob James. “I would like my music to be a conduit for peace, kindness, love and light,” shares the petite, soft-spoken, yet commanding pianist. She adds, “My recording Echo is my attempt to capture all of these elements into the vibration of sound.” On February 22, 2019 Keiko Matsui will release her 28th recording as leader, Echo, which she co-produced with Grammy nominated producer Bud Harner. A master storyteller, Matsui crafts exquisite compositions replete with lush harmonies and global rhythms to create timeless musical anthems. Like iconic musicians Miles Davis and Shirley Horn, Keiko is also a master at utilizing space in her music to create a backdrop of drama, tension and sheer beauty. Keiko’s most inspired work yet, Echo features numerous special guests including bassist Marcus Miller, saxophonist Kirk Whalum, vocalist Gretchen Parlato, guitarist Robben Ford and bassist (and son of Clint Eastwood) Kyle Eastwood. The all-star line up also showcases premiere recording musicians drummer Vinnie Colaiuta, bassist, Jimmy Johnson and guitarist Paul Jackson, Jr. and percussionist Luis Conte, as well as Keiko’s top notch touring band, Jimmy Branly, JP Mourão and Rico Belled. …

“While composing the songs on Echo, I had a feeling of gratitude and a sense that there were infinite possibilities,” reflects Keiko Matsui. “This music is close to my heart because it is a celebration of the joy of the imagination, the strength of courage and the endurance of faith. It is about romance and a reminder to honor all living things.” There is a grace and spirituality about Keiko that permeates her music and very essence. Listening to Echo, you feel as if you are transported on a journey as the music unfolds like ten sweeping movements in a rapturous suite. The prolific Matsui composed 100 motifs for the recording that eventually were narrowed down to the songs featured on the CD.

“I love his playing and his performance on “Echo” is a reflection of his personality and divine musicality,” shares the pianist. The song also features a gorgeous solo from guitarist Ramon Stagnaro. Joined by a ten-piece ensemble Keiko Matsui’s effortlessly orchestrates the triumphant and climatic “Esprit,” which showcases tenor saxophonist Kirk Whalum. The duo previously recorded together on Keiko’s 2011 CD The Road… “I feel Kirk and I share the same mission, which is to dedicate our music to the unification of all people on this earth. We have been good friends for a long time and I respect both his spiritual and musical approach.” Keiko’s “Marlin Club Blues” has a flare reminiscent to Joe Zawinul’s classic “Birdland” and in addition to Keiko’s own keys features Randy Waldman Jr. on Hammond B-3. The tune is the first blues Keiko has penned and also showcases guitarist Robben Ford, who conjures up a rollicking solo for the occasion. Keiko shares, “I love Robben’s sound and solo on ‘Marlin Club Blues.’ He has a way of playing that beautifully balances silence and soulfulness.”

Echo also features Keiko Matsui’s tender “Invisible Rain,” which ebbs and flows with sweeping melodic lines that swell with emotion. The pianist invites vocalist Gretchen Parlato to join her on the album’s first single “Spirit Dance.” “After the melody came to me with a Brazilian flavor, I immediately thought of Gretchen, who I had met on a cruise a few years ago,” says Keiko. “I was familiar with her use of voice as percussion, and the chorus section of this song seemed really made for her. It was a fun reunion and she couldn’t have been nicer to work with. “Now Is the Moment” is a tantalizing number that showcases Keiko’s unrivaled ability to create moody and captivating soundscapes while the joyous, percussive and Latin inspired “Viva Life” displays Keiko and the band having some fun as they show off their rhythmic elasticity and tight-knit interplay. Echo comes to a fitting finale with “Return To Eternity,” which highlights Keiko’s agile and always tasteful touch and features bassist Kyle Eastwood. “I had been aware of Kyle’s work as an acoustic bassist and his beautiful soundtrack work with his father Clint Eastwood. When the melody for ‘Return To Eternity’ came to me, I immediately imagined him playing the acoustic bass on the song.”

Keiko Matsui took her first piano lesson at five and she made her US recording debut in 1987 with the recording A Drop of Water. Under Northern Lights followed in 1989 and her subsequent albums of note include No Borders (1990), Night Waltz (1991), Cherry Blossom (1992), Doll (1994), Sapphire (1995) and Dream Walk (1996), which remained on the Billboard Contemporary Jazz Chart for over 15 months and further cemented her reputation as a force to be reckoned with.

In 1997, she launched a tour dedicated to raising awareness of breast cancer, and released a four-song CD entitled A Gift of Hope that benefited the Y-Me Breast Cancer Organization. Her music was prominently featured in Say It, Fight It, Cure It, a Lifetime special profiling several courageous women battling breast cancer. “My fans come from all backgrounds and I have been approached by various foundations to join in their efforts. When I hear of a cause that resonates with me that I can dedicate my music to, then I am always willing. It is my way to show gratitude and give back,” states Keiko. In 1999, the pianist performed at “A Golden Moment,” a skating concert featuring Olympic figure skaters Kristi Yamaguchi, Tara Lipinski, Ekaterina Gordeeva, and Katarina Witt, which benefited the Susan G. Komen Foundation. 1998 saw the release of her album Full Moon And The Shrine, which was accompanied by the acclaimed PBS-TV special Keiko Matsui: Light Above The Trees. In 2000, the special earned Keiko a National Smooth Jazz Award for “Best Long-Form Video Achievement” and she was honored with an award for “Best Female Artist.” She claimed the award again in 2001. In 2002, she released the poignant recording, The Ring, which was meant to communicate a message of peace, compassion, and humanity to listeners around the world.

Keiko Matsui’s CD Deep Blue (2001) topped Billboard’s Contemporary Jazz charts for three consecutive weeks. She is the first Japanese artist to achieve this honor. In 2003 she enjoyed success with her recording The Piano, which featured reinventions of some of her most loved original works. In 2004 the title track of Keiko’s Wildflower was used to support the United Nations World Food Programme’s efforts in Africa. “I decided I wanted to support the WFP after learning about the tremendous problems in Africa and how humanitarian assistance can change people’s lives for the better,” shares the activist. Keiko has also collaborated with Asians for Miracle Marrow Matches (A3M) in numerous charity concerts. In addition, proceeds from her 2001 mini-CD, A Gift of Life, went to The National Donor Program and Marrow Foundation in support of A3M.

In December 2009, the highly sought-after pianist was asked to put together a Christmas show at the Blue Note club in Tokyo, which was a major success and in November 2010 she made her highly anticipated debut at the Blue Note in NY, which was sold out. In 2011 Keiko recorded with fellow pianist Bob James on a four-hand piano project called Altair & Vega. Keiko’s depth as a composer has also allowed her to contribute music to soundtracks in Japan, the U.S. and Russia.

Keiko also released her critically heralded Billboard Top 5 recording The Road… which featured Cameroonian bassist Richard Bona and saxophonists Kirk Whalum and Jackiem Joyner among others. In 2013, Keiko Matsui celebrated the release of her critically lauded album Soul Quest, which is the musical inspiration behind Live in Toyko. The same year she was also an invited guest in Istanbul for International Jazz Day alongside luminaries Herbie Hancock, Branford Marsalis and Terence Blanchard. 2016 saw the release of Journey To The Heart, which was Keiko’s first acoustic project and debuted at #1 on the Billboard Contemporary Jazz Charts.

Echo further cements Keiko Matsui’s place as one of the most dynamic and important voices in instrumental music. She concludes, “My sole desire is to write songs that create a feeling of oneness. This music is a reflection of my thoughts and life and right now, I am drawing my road towards happiness and truly learning about what it means to be happy.” May Keiko Matsui’s Echo lead you to your happy place.

Since the runaway success of her 1990 debut album Circle of One (which went Platinum), and the impassioned hit single “Get Here” (the Brenda Russell composition that became an unofficial anthem of the 1991 Gulf War) Oleta Adams has inspired a growing legion of fans in the U.S. and Europe with journeys of the heart via songs that draw deeply from her roots in gospel, while crossing effortlessly into the realms of soul, R&B, urban, and popular music. Her success, nurtured by worldwide tours with Tears for Fears, Phil Collins, Michael Bolton, and Luther Vandross, has been solidified by four Grammy nominations and a seemingly bottomless well of creative energy.

A long-time resident of Kansas City, Kansas, where she has found sanctuary from the turmoil of the entertainment industry, Oleta Adams also remains anchored by her upbringing in the Pacific Northwest. The youngest of three girls and two boys, Oleta spent her formative years in Seattle before traveling over the mountains at age six to Yakima, Washington, an idyllic town of 60,000. She first demonstrated her budding vocal gifts in the Pilgrim Rest Baptist Church where her father served as minister.
By the time Oleta was eleven, she was directing and accompanying four choirs, having already established herself as a piano prodigy. She credits her further musical development in junior high school to Lee Farrell, “the brilliant Julliard-trained teacher and voice coach who changed my life.” School provided another outlet for Oleta Adams: the theatrical stage. In her senior year she broke barriers and traditions as the star of Hello Dolly! admitting that “early on I realized the pleasures of being a big fish in a small pond.”

Turning down the chance to pursue an operatic career as a lyric soprano, along with a scholarship to Pacific Lutheran University, Oleta instead spent a summer in Europe before heading to Los Angeles in the early 1970s. One demo tape and $5,000 later, she discovered that the disco movement had deafened music executives. Oleta’s gospel-flavored voice was not “in.” With the help of Coach Lee Farrell she wound up in Kansas City, where she launched her career playing piano bars, hotel lounges and showrooms.

Oleta quickly became a local institution, with her own billboard and a regular gig at the Hyatt Regency Hotel. Celebrities from every musical genre caught her act, including Eartha Kitt, Cab Calloway, Air Supply, Gino Vanelli, Yes and Billy Joel. Finally serendipity came in the form of the British band Tears for Fears, whose frontmen Roland Orzabal and Curt Smith asked her to appear on their 1989 “The Seeds of Love’ album, video and European tour. Proving that good things come to those who wait, upon her return to the U.S. Oleta signed a record deal for her first solo album in 1991.

With eight CD releases including secular, gospel, and a Christmas album, worldwide acclaim and over two-and-a-half million albums sold. Oleta’s musical odyssey continues – spiritually and creatively. For this consummate artist – composer – producer – musician, many goals remain on the horizon. The first of which is two new songs being released on iTunes from an in the works prayer album Safe and Sound & Long and Lonely Hours.