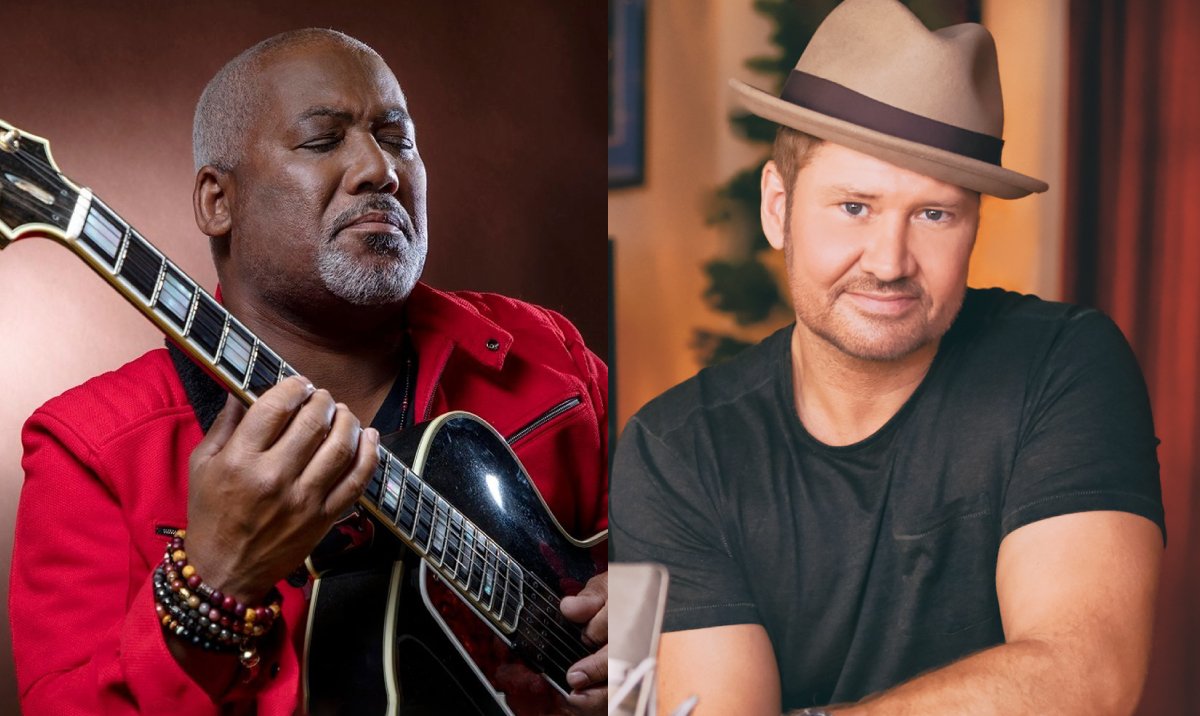 Jonathan Butler is a singer-songwriter and guitarist who leads a life few can imagine. Born in South Africa under the shadow of apartheid and raised in poverty, Butler was the first non-white artist to be played on South African radio and appear on national television. Though his musical abilities would take him away from the world he grew up in, Jonathan would neither forget the plight of his fellow South Africans, nor the man that led them to freedom. It is for this reason Nelson Mandela credits Butler’s music as having inspired him during his imprisonment. In more ways than one, Jonathan Butler is representative of South Africa.

Jonathan’s story begins at a very young age when his father presented him with a homemade one-string guitar. Little did his father realize that he was giving way to a musical phenomenon. From then on, Jonathan’s musical gifts grew by leaps and bounds. In his early teens Butler won a local talent contest, affording him the opportunity to perform with a touring musical company throughout South Africa. On occasion he would perform at lavish concert halls for whites only, where he would not be allowed to use the bathroom, and the very next night he would perform in a dilapidated local township. Ultimately, his ticket to a new life was music.

At thirteen, Jonathan’s talents caught the eyes and ears of the British record producer Clive Caulder. He was signed to Caulder’s Jive Records and the rest is history. Jonathan’s first single broke down racial barriers becoming the first song by a black artist played by white radio stations in South Africa and won the South African equivalent to a Grammy®.

His commitment to his craft came to fruition with his self-titled debut album, which received a Grammy® nomination for the pop hit “Lies.” An instrumental “Going Home” earned him another Grammy® nomination and the mid-tempo ballad “Sarah, Sarah” confirmed Butler’s place in popular music.

However, to Jonathan Butler, success is measured on a higher plane.

A religious and spiritual man, Butler dedicates his life to being a devoted father and grandfather, and a caring citizen to his homeland, South Africa.

And in spite of all the hardships, Jonathan Butler has an air of playfulness and quiet resilience that is easily visible in his passionate performances.

When 2020 began, Michael Lington was eagerly looking forward to many wonderful events – the impending birth of his son Landon, touring again with his fellow saxophone stars Vincent Ingala and Paul Taylor as Sax to the Max, and numerous European solo dates. Then COVID-19 hit, and the resulting lockdown scrambled everything. Prevented from hitting the road, Lington quickly turned his home studio into one of contemporary jazz’s premiere virtual performance destinations, with a popular ongoing series of weekly shows on the StageIt platform.

In a year like no other, the pandemic has wreaked havoc with our health, the economy and our day to day lives – but with the relase of his latest recording Alone Together on Peak Records (distributed through BVD/Sony/Orchard), the innovative artist and his array of musical friends (from the worlds of contemporary jazz and beyond) remind us it can’t stop the flow of creativity and determination to bring fans together to experience a collective joy like no other.

“Alone Together is a unique project that presented itself in many shapes and forms,” Lington says. “When the pandemic started and all my touring was postponed indefinitely, I knew I needed to continue creating music for my own well-being. It was more a matter of my mental health than financial survival. I didn’t want to sit around feeling stagnant and unproductive. That’s when I started doing my virtual shows from my studio on StageIt.

“A few shows in,” he adds, “I started inviting special guests to perform with me, but as technology wasn’t allowing for ‘live’ duets we did it literally ‘alone together’ from separate locations as a pre-record. The most exhilarating part was that my fellow artists that I invited all said yes immediately – and the same goes for the selections I made for this album. At a time when I thought I might not be working at all, I’ve never worked so hard in my life to bring all the musical and technical elements together. This has been a very difficult juncture in all of our lives, but what it has shown me is that we as human beings are very cable of adapting and uniting, even in the most challenging of circumstances.”

In addition to the opportunity for fans to once again experience favorite warm-hearted and transcendent moments of the StageIt shows, the tracks on Alone Together allow everyone to revisit some of the most compelling original and cover songs from Lington’s multi-faceted 20-plus year solo discography. Opening with a rousing version of “Baker Street” featuring Javier Colon (from Heat), the set includes “Everything Must Change” feat. Chris Walker (Everything Must Change), “Gonna Love You Tonight” feat. Kenny Lattimore (Soul Appeal), “My Love” feat. Dave Koz (Stay With Me), “Some Kinda Way feat. Sy Smith (Second Nature), “Slick” feat. Brian Culbertson (Second Nature), “So Very Hard to Go” feat. Dorian Holley (Silver Lining), “Road Trip” (feat. Nick Colionne) (Pure) and “You’ve Got a Friend” feat. Billy Dean (A Song For You). Lington also fires up a dynamic horn conversation with superstar saxman Boney James on Boney’s #1 hit “Up All Night.”

Beyond the ongoing flow of Lington favorites, themed presentations like tributes to the music of Luther Vandross and David Sanborn and special holiday shows, a major key to the success of Lington’s livestream series is its state-of-the-art video and audio technology. Lington launched the venture a bit more primitively, tinkering around with some basic streaming equipment he had in his studio and getting it up to speed just enough so that he could test a few opening shows on Facebook Live. He dialed in the sound quickly, then wanted better camera’s and lighting and a more professional, higher quality visual presentation.

His friend Evan Lowenstein, founder of StageIt, had been telling him for years about the benefits of working with his company. Thousands of artists have used the popular platform, where they perform live, interactive, monetized shows for their fans directly from a laptop, offering those fans special one time only experiences that are never archived. Lington started the series with the StageIt interface and a simple mono feed with his computer camera and no special lighting.

With the company’s help, and inspired by his opening show which sold well,  Lington achieved stereo sound and entered what he calls the “brave new world,” adding new tech elements with each show. He began using OBS broadcasting software to run video packets, graphics and overlays, adding webcams, enhancing the lighting and treatment of the room and ultimately running the streaming through a Mac Pro. He currently works with moving BlackMagic Designs 4K and 6K cameras and broadcasts in 1080HD.

When it came time to stream the duets, technical challenges made it impossible to do them live. So for each duet, Lington and each artist created pre-recorded videos, doing one take from top to bottom. He mixed the music and then sent it all to a video editor to synch it up – and the result is pure sonic and split screen visual magic. As Lington says in his liner notes, “What ended up happening was incredible. We put together performances that were so real, heartfelt and authentic that it became apparent we were creating something special. We captured a spirit and vibe beyond anything I could have imagined. It’s not about being perfect but all about the heart and soul. It’s exciting to now share that magic again on Alone Together.

“Besides prompting me to learn a lot about new technologies, one of the loveliest aspects of the StageIt series is how it has created a special community among longtime and new fans. When you perform like this, you never know whos’ out there listening. Then I get those heartwarming emails that say things like, ‘We’re all locked down at home, and every Sunday night you give us a sense of normalcy in the world and something to look forward to.’ To them, I’m no longer just Michael Lington, the artist, but the friend who comes into their home and chats with and plays for them—and we are now Alone Together!