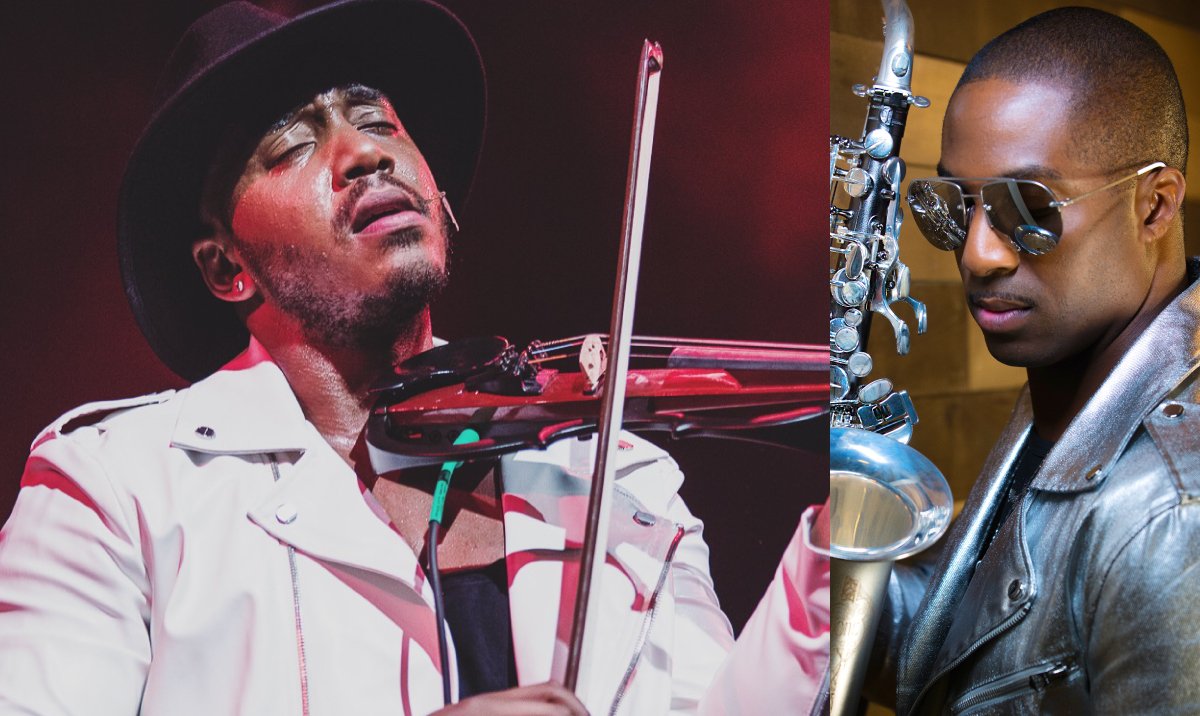 Damien Escobar is a world renowned violinist, author, entrepreneur, and philanthropist, hailing from Jamaica, Queens, New York. His musical career spans over a decade, and his inspiring journey of making it big, losing it all, fighting to rebuild, and getting a second chance at success is as much apart of his brand identity than being among the top violinist in the world.

The now NAACP Image Award nominee and Billboards chart topping artist, was once humbled by homelessness after calling it quits from his famed group, “Nuttin but Stringz.” The group, comprised of Damien and his brother, Tourie– known in NYC for playing their violins on the subway; gained global recognition when they appeared as contestants on “America’s Got Talent.” The competition helped to catapult the duo into stardom and they quickly experienced all the highs of being the most sought after musicians of their time. However, that glory was short-lived and the fall from grace was a hard hit, to say the very least; as the group disbanded and  a bruised Damien made the decision to retire his violin. What came next was a struggle– not only with his identity, and depression, but with finding success in other non-creative endeavors.

Looking back at his journey, Damien realizes it all  needed to fall apart so he could be forced to grow while putting it back together the right way. Prevailing was a process and it started with unburying his talent– his love of playing the violin. And in 2013 Damien released his first album as a solo artist, “Sensual Melodies.” Once thought of as a passion project, the album garnished over 200K downloads; landed on  the iTunes Top 100 chart; and served as a springboard for a successful national tour where he headlined, for the first time, as the one and only, Damien Escobar.

From there, doors that were once closed, became a little easier to push open; affording Damien opportunities to tell his inspiring story to publications like People Magazine and Huffington Post; make appearances on local and national news including “The Today Show”; serve as a guest on radio broadcasts;  and even accept invitations to perform at notable events such as Oprah Winfrey’s “The Life You Want” tour. Back in the spotlight, Damien decided this time around he would do more with his visibility and began his entrepreneurial walk by penning and self-publishing his very first children’s book, “The Sound of Strings”; building his very own line of custom designed violins; and establishing partnerships to develop a wine line, perfume and fragrances, and a non-profit organization that would include a music program for children.

Motivated by his past and grateful for his fans and future, Damien went on to release his second album, “Boundless.” Growing into a self-conscious artist with more than a mission to make good music, Damien sought to inspire change and spread positivity by sharing uplifting messages and telling unfiltered personal stories to sold-out arenas across the world during his second tour. Though he’s achieved more than he could have imagined after pulling himself up by his bootstraps and kick starting his solo career– Damien Escobar’s story isn’t over yet. The breakout artist has partnered with Mitsubishi and is now the face and sound of their latest campaign; he’s releasing new music and videos set to air on major broadcast channels; and, the world famous violinist, continues to build his brand centered around making an impact and inspiring social change. Stay tuned, there’s more to come.

For Eric Darius there are no limitations when it comes to breaking new ground. Internationally known as an elite Jazz/R&B/Pop Saxophonist, Songwriter, Producer, and Performer, Darius recently dropped, “L.O.V.E Feat. Brian Culbertson” the third single from his seventh studio album, Breakin’ Thru, which debuted at #2 on the iTunes Top 40 Jazz Albums Chart.

This project is an extra special milestone for Darius as it is his first release via his own independent label, SagiDarius Music. The title track and debut single for Breakin’ Thru has been a staple on Contemporary Jazz radio reaching #1 on the Billboard Charts, as well as his second single Dare 2 Dream, which reached the Top 5 on the Billboard Charts.

About his foray into independence, Darius says, “I’m was really excited to finally release an album on my own record label. The timing just felt right after 15 years in the music business. Seeing how the music industry has changed over the years, I thought it was time to take a leap of faith and take complete advantage of the new technology and social media that is now at my disposal – putting the music entirely back into my own hands, giving me creative freedom, and giving the audience and fans a direct experience exactly the way I hear and feel it with no restrictions.  Breakin’ Thruis about breaking down all of the walls, barriers and boundaries, and just making good, uplifting music. It’s not about genres. When you listen to this project, you’ll hear so many elements from Hip-Hop, to R&B, Pop, Rock, Gospel, Funk, and Reggae. I don’t want to be caged or boxed in musically. The project is a true and honest representation of myself as an artist and reflects my growth as a person, musician and songwriter.”

Not only was the recording of Breakin’ Thru a liberating experience for Darius creatively, it honed his skills as an entrepreneur. “I studied both music and business while attending the University of South Florida. I’ve always been in tune to the business aspect of music. But now that I’m overseeing everything from the music, production, marketing, budgeting, distribution to manufacturing of this project, it’s been intensified to where I have to ensure every “T” is crossed and every “I” dotted. I feel like I’ve learned so much from the entrepreneurial side of things in this process and it will only benefit me down the line in all facets of the music industry.”

Eric Darius was born in Livingston, New Jersey, raised in Tampa, Florida, and now resides in Los Angeles, CA. He grew up in a very musical family to a Haitian father, who is a bass player and Jamaican mother, who is a singer and piano player. That Caribbean influence was passed down to Eric and his siblings. His older brother is a drummer and trumpet player, and his sister sings and plays clarinet.

“I first fell in love with the saxophone as a 9-year-old and began playing at the age of 10,” Eric recalls. “By the time I was 11, I started touring worldwide with Sonny LaRosa and America’s Youngest Jazz Band and playing Caribbean music in our family band. It’s truly a blessing to be from a family that not only supports my passion for music but has also given me so many opportunities to nurture my God-given gift and pursue a career in it.”

While growing up, Darius was also influenced by Earth Wind & Fire, Michael Jackson, Stevie Wonder, Prince, Marvin Gaye, George Benson, James Brown, David Sanborn, Miles Davis, Bob Marley, and Grover Washington Jr., among many others. While still in high school, at the age of 17, he recorded and released his first album titled, Cruisin’, which would lay the ground work for his seven full-length albums. In 2004, Darius signed his first record deal with Higher Octave Music, after label representatives saw him perform and wow the audience at Florida’s Clearwater Jazz Festival. This resulted in the release of his national debut album, Night on the Town later that year. In 2006, Darius released his third project, Just Getting Started through Narada Jazz. In 2008, he released Goin’ All Out (Blue Note Records), in 2010 On A Mission and 2014 Retro Forward (both through Shanachie Entertainment).

Darius believes in giving back to today’s youth in the form of education. His On A Mission in the Schools initiative include making regular appearances to speak and perform with students from elementary and middle schools to high schools and at the college level. “I benefited greatly from the music-arts programs, and education is very important to me,” says Darius. “I’m an advocate for music in the schools and I want to help keep it alive. It’s important to me to expose kids to Jazz, encourage them to follow their dreams and inspire them to play musical instruments. I feel I have a responsibility to pay it forward, encourage the next generation and help preserve the future of music.”